Yesterday was International Women's Day and today we take a moment to recognise the tireless hours of detective work, the genius discoveries, and the lives made better by women detectives in 19th century British literature.

Women detectives were also getting the job done back in Victorian England, right alongside Sherlock Holmes, and here we explore why they deserve more attention.

Although women weren’t allowed to enter the police force in the UK until around the time of World War I, there were female private detectives in the UK in the late 1800s, around the same time Sherlock Holmes was galavanting around London, solving mysteries. And even before that, authors were writing women detectives, of both the amateur and professional variety, into their fictions. 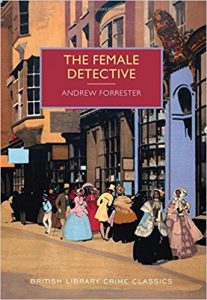 Wilkie Collins’s Anne Rodway in “The Diary of Anne Rodway” was one of the first female detectives in literature, amateur or otherwise. But unlike Sherlock Holmes, Anne falls into solving a mystery after her friend dies under suspicious circumstances. When the police seem to be bungling the case and are unwilling to listen to what she has to say, Anne takes matters into her own hands. Take that, patriarchy!

Then came Andrew Forrester’s Miss Gladden (or “G”), though we as readers are never really sure if this is her true name, and in fact a lot of details about G’s life are concealed from us. Her personal identity is not the point of the stories; the point is the mystery. Forrester’s Miss Gladden short stories have been collected in The Female Detective—originally published in 1864 and rereleased for contemporary readers in 2016.

Later, in 1888, Mr. Bazalgette’s Agent by Leonard Merrick became the first British novel to feature a female detective. Like Collins’s Anne Rodway, Merrick’s protagonist Miriam Lee only becomes a detective because her situation forces her to do so. Having fallen on hard times, Lea answers Mr. Bazalgette’s ad for a private detective, and she then finds herself on a journey across the world in search of “an audacious fraudster.” We can learn a lot about gender roles and expectations of the Victorian time period by comparing these female detective narratives to those of Holmes. Unlike Sherlock Holmes, who is kept at a distance from the reader through the curious narrator and onlooker/participant character of Watson, many of the female detectives mentioned in this article speak directly to the reader, often narrating their own stories through diaries or letters, forms of writing that were more suitable for women at the time and that are traditionally seen as much more emotional and intimate than a published story narrated by an outsider or in the third person.

Furthermore, the female detective of the Victorian era is often forced into her investigation because of outside forces beyond her control. This is likely because detective work, and really any work in the public sphere, was not considered ladylike, and authors felt it necessary to explain how their women characters fell into such work. In his introduction to The Female Detective, Mike Ashley writes that even now “there is a residual belief that women are inherently more endowed than men are with qualities of sympathy and care…the woman detective is [therefore] somehow slumming when she ventures into a criminal world that is dominated by crude, unsympathetic, and cruel men.”

Perhaps it is this ethic of care that women are supposedly naturally endowed with that makes female detectives feel more intrinsically connected to the victims of crimes than Sherlock Holmes traditionally is. One of Holmes’s defining characteristics is his emotional distance from the crimes he investigates, which helps him come at the crime with a logical and detached mind. Female detectives of the same period are often more attached. This could also have to do with the fact that women are traditionally the victims of crimes in these narratives, and thus women who are used to being objectified and victimized are going to have a different perspective on violence and crime. That, too, is what can make female detective fiction so empowering, however: this idea that these women who are usually the victim can flip the narrative, fight for themselves, and get justice on their own terms.

We can also learn a lot about gender norms by looking at the limitations placed on women in detective fiction. Even in a place of empowerment, women detectives were not on the same footing as their male counterparts.

In her book The Woman Detective: Gender and Genre, Kathleen Klein argues that women detectives exist outside of societal norms, and this is what makes their existence so problematic for the detective genre, which is so bent on returning life to normalcy by the end of the narrative. Klein explains that the female detective’s “presence pushes off-center the whole male/female, public/private, intellect/emotion, physical strength/weakness dichotomy. Therefore, her façade of normal respectability—like the criminal’s—must be stripped away.”

By the end of the story, the woman detective is often taken down a peg or two, and/or she is sent back to her domestic sphere. In the case of Wilkie Collins’s Anne Rodway, for instance, the amateur sleuth’s fiancé shows up to take care of the dirty work after the mystery is solved, and in the end, Anne and her fiancé get married. This need for a return to normalcy in traditional detective fiction might be why, to this day, female detectives are the exception rather than the rule.

If you love the Sherlock Holmes canon then here are a couple of books that have female detectives written into their fiction.  These first two books by Molly Carr feature Mrs Watson as the detective with a supporting cast of Sherlock Holmes and Doctor Watson. In Mrs Hudson Investigates by Susan Knight the role of detective extraordinaire is played by no other than Sherlock's long suffering landlady. And one of my personal favourites is My Dear Watson. The Author, Margaret Park Bridges reveals to the public the true identity of Sherlock Holmes as a woman.