To celebrate International Women's Day we're sharing this list of fascinating female characters in the Sherlock Holmes canon. ACD was hardly a feminist, but he did give us a wide range of colourful female characters, from virtuous to villainous and everywhere in between. Besides Irene who outsmarts Holmes and is undoubtedly a badass, here's some other characters, both good and bad.

Poor Mrs. Hudson! Holmes and Watson’s long-suffering housekeeper has to deal with a tenant who improvises upon both his violin and his chemistry set at all hours, practices target shooting in his living room, has a constant stream of unsavory characters (and also, to be fair, royalty) visiting him, and only eats her excellent cooking about half the time. Plus there’s the fact that people are always trying to kill him—I count at least three attempts at murder on the premises, any of which could have rebounded on Mrs. Hudson instead, and one semi-successful arson. But good old Mrs. H sticks with Holmes even more steadfastly than Watson does. The astronomical rent Holmes is paying her by the end of the series probably accounts for it, but I’d love for an adaptation to give us a little more insight into why else Mrs. Hudson might let this dangerous pain in the neck hang around. Mary has the second most appearances in the canon after Mrs. Hudson, and is probably one of the most significant female characters in Sherlock Holmes stories. Introduced in The Sign of the Four, Mary comes to Holmes when a mysterious benefactor writes to her and offers to shed some light on her father’s disappearance. Watson is instantly smitten, and even Holmes admires her logical mind and organized person. Mary consistently offers comfort to her fellow women, teases Watson, and scorns a fortune when it’s within her grasp. I’d love for more adaptations to stop ignoring her and show us exactly why Watson fell so quickly. 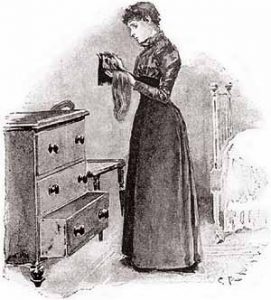 The first of the four (!) women named Violet in the canon, Miss Hunter comes to Holmes because of a sketchy job offer: a couple named Rucastle has offered her a fortune to be governess to their son, but in exchange they want her to cut off her distinctive red hair and wear the specific clothing they’ve selected. It’s less fetishy than it seems, but still involves kidnapping, brain fever, and financial coercion. Despite Violet’s intelligence and courage, Holmes fails to fall in love with her, to Watson’s noted disappointment. She ends up running a girls’ school out in the country, and I would like a 20-book series where she solves mysteries there, please and thank you! When Percy Phelps has a top-secret naval treaty stolen from his desk and collapses with nervous prostration, it’s his fiancée Annie who nurses him back to health—and it’s Annie’s cleverness and loyalty that allow Holmes to eventually recover the plans and avert war. I love that Annie lies smoothly and convincingly at Holmes’s urging, but I love even more her complete lack of patience with his sudden out-of-character descent into theology upon beholding a particularly pretty bed of roses. We don’t have time for this, buddy, there’s a treaty to find! Violet #2 comes to Holmes because she’s being stalked by a mysterious man on a bike during her weekly rides to the train station. Watson uncharacteristically seems to consider stalking and sexual harassment as a reasonable price to pay for being a pretty woman in the world, but Holmes isn’t having it—and neither is Miss Smith, who in one memorable scene turns her bike around and rides straight at her would-be pursuer, causing him to flee. Good for her! When Violet #3 comes under the thrall of the vicious and possibly murderous Baron Gruner, Holmes secures the assistance of one of his former paramours to help break the spell. Kitty gets her revenge in spectacular fashion—a vial of acid is involved—but she also gets to be strident and vicious and angry in a way that Victorian (and modern) ladies weren’t supposed to be. Her righteous fury is a joy to behold, and her vengeance is satisfyingly cruel. The seemingly motiveless murder of the young secretary to an aging scholar brings Holmes out to investigate—and subsequently untangle a complex web of deception that shows just how close those of us with poor eyesight are to totally stabbing people to death by accident. Anna is a non-violent Russian Nihilist who has done a stint in Siberia and is now on a quest to free her comrades, and I would gladly trade a dozen instances of Inspector Lestrade being bungling and smug for even a sentence more of her backstory.

7. EFFIE MUNRO (“THE ADVENTURE OF THE YELLOW FACE”) Mr. Grant Munro tells Holmes and Watson of his wife's (Effie's) deception and secret liaisons with the occupants of a nearby cottage.  It is revealed that Effie had been previously married to an African-American who had died of yellow-fever.  At the time Effie came to England, she also had a daughter who was sick with the disease. But later, after she and Grant were married, Effie got word that Lucy was alive and well. Upon hearing of this, Effie became overcome with desire to see her child again, so she asked for the hundred pounds and used it to bring Lucy and her nurse to England, and installed them in the cottage near the Munro house.  This story highlights the lengths a woman will go to to be re-united with a child. 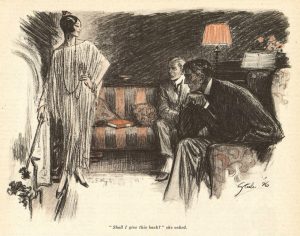 Look, “Gables” is even more racist than your standard Holmes tale and I can’t in good conscience recommend it as a story, but I do want to give a shout-out to Isadora, the only classic femme fatale in the canon. (I maintain that Irene is the victim of “Bohemia” and not the villain.) She is a noted beauty who drives foolish young men to write heartbroken thinly-veiled novels and die dramatically on the Continent, and that’s awesome. 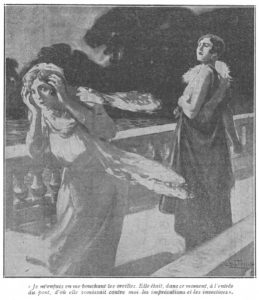 Our ladies are getting nastier as we go! Mrs. Gibson, knowing her horrible husband has fallen in love with their governess, commits suicide in such a way as to frame the governess for it. No, it’s not commendable, but the sheer inventiveness of her Rube Goldberg-esque suicide method deserves a tip of the hat.